Autoneum grows profitability and earnings in a difficult environment

We saw a number of global challenges again in 2021. The worldwide shortage of semiconductors dampened market development in the automobile industry. Although production volumes were almost the same in 2021, the year was more challenging from an operational perspective than 2020 was; supply chain bottlenecks led to short-term and unplanned production downtime at automobile manufacturers throughout the year. This resulted in frequent interruptions in production at Autoneum as well because of closely connected manufacturing processes. Rising costs for raw materials, energy, and transport presented additional challenges.

Despite the challenging environment and weak global production volumes, Autoneum managed to return to profitability in 2021, generating a positive net result. Thanks to further operational improvements and optimization measures in all organizational areas, earnings were improved in all four Business Groups.

Automobile production in 2021 as a whole increased by 3.4% to 77.1 million vehicles and thus remained still well below the 2019 level (89.0 million vehicles). Autoneum’s revenue in local currencies declined by 1.6% year-on-year. Although revenue in three of four regions developed better than the market, the Company was below global market development. On the one hand, this is due to the fact that some vehicle models of US manufacturers predominantly supplied by Autoneum were disproportionately affected by the semiconductor shortage. On the other hand, Business Group Asia, which outperformed the market, accounted for a smaller share of Autoneum’s total revenue. The consolidated revenue in Swiss francs fell by 2.3% compared to the previous year to CHF 1 700.4 million (2020: CHF 1 740.6 million). 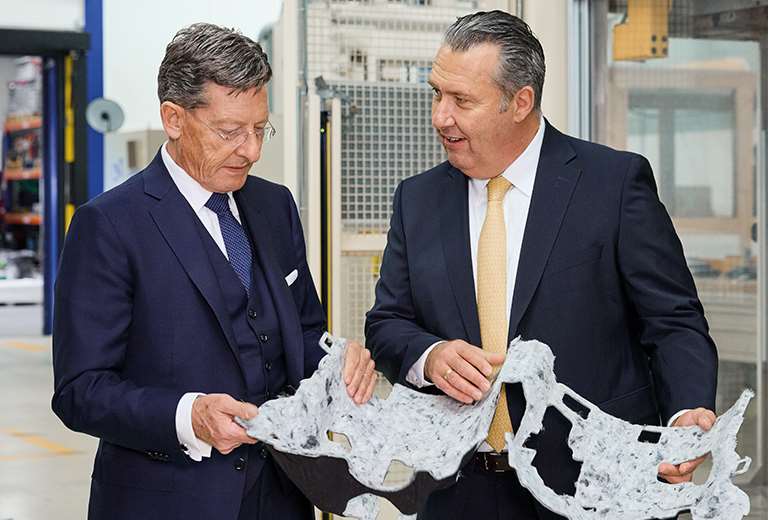 Although volumes were just about as high as in 2020, production output was considerably more challenging in 2021. Production at vehicle manufacturers was stop and go and characterized by frequent interruptions – which led to planning uncertainty and required a continuous readjustment of resources (staff, raw materials) in line with customer call-off behavior, which changed at short notice. Furthermore, increasing inflation around the world not only had a negative impact on raw material prices, but also increased energy and transport costs.

Autoneum performed well in this challenging market environment, generating a net profit in the financial year 2021. Despite the considerable challenges, all four Business Groups managed to improve profitability. Significant drivers in this regard were the consistently implemented efficiency optimizations at plants and the resulting increase in operating performance as well as further improvements from the turnaround in North America. The positive effects of the turnaround program, which is proceeding as scheduled, were muted by the low production volumes, but they were nonetheless clearly discernible in the 2021 financial year. On balance, Autoneum was able to more than double its EBIT in 2021 compared to the previous year by CHF 29.7 million to CHF 57.5 million. The EBIT margin improved to 3.4% (2020: 1.6%). After deduction of the financial and tax result, the net profit for 2021 as a whole was CHF 30.1 million (2020: net loss of CHF 10.7 million).

BOARD OF DIRECTORS PROPOSES A DIVIDEND OF CHF 1.50

On the basis of this progress and the positive net result, the Board of Directors of Autoneum Holding Ltd will propose a dividend of CHF 1.50 per share to the Annual General Meeting on March 23, 2022.

Personnel change on the Board of Directors

Business Group Europe posted a decline in revenue of 1.6% in local currencies and was thus significantly above the market development, which saw production fall by 3.9%. Revenue in Swiss francs decreased to CHF 636.9 million (2020: CHF 641.8 million). It is therefore all the more pleasing that Business Group Europe managed to increase EBIT by CHF 10.8 million to CHF 32.2 million year-on-year (2020: CHF 21.5 million) despite the declining market. As a result, the EBIT margin increased by 1.7 percentage points to 5.1% (2020: 3.3%). At the operational level, digitalization was furthered with Autoneum’s Manufacturing Excellence System (MES). At several European plants, projects to automate logistics using driverless transport systems (DTS) were introduced and the automation of production was implemented systematically.

By contrast, revenue for Business Group North America in local currencies dropped by 7.2% and was thus well below the market, which saw a small increase of 0.2%. The vehicle models of US customers predominantly supplied by Autoneum were disproportionately affected by the shortage of semiconductors, as a result of which Autoneum lagged behind the market development in this region. Inflation and the irregular utilization of production capacity therefore represented an especially major challenge. Because of the declining market trend and negative currency effects, the revenue of Business Group North America in Swiss francs fell by CHF 66.5 million to CHF 687.0 million (2020: CHF 753.5 million). Despite the decline in revenue and the resulting loss of contribution margin as well as increased costs for raw materials, Business Group North America managed to reduce its deficit at the EBIT level in 2021 by CHF 6.1 million to CHF –37.5 million (2020: CHF –43.6 million). The main drivers of these enhanced earnings were continuous improvements made under the turnaround program.

The Asian market was least affected by the global shortage of semiconductors in the financial year. Accordingly, Asian automobile production in 2021 performed the best compared to other regions, with growth of 6.4%. Business Group Asia once again exceeded the overall Asian market, with organic revenue growth of 6.7%. Revenue in Swiss francs increased to CHF 281.0 million (2020: CHF 254.1 million) and was thus even slightly better than the pre-crisis level of 2019 (CHF 275.7 million). Thanks to the increased utilization of its capacities, Business Group Asia was able to improve its EBIT in financial year 2021 by CHF 17.1 million to CHF 39.3 million (2020: CHF 22.2 million), with positive effects of CHF 4.8 million coming from the reversal of special impairments. Year-on-year, the EBIT margin improved by a considerable 5.3 percentage points to 14.0% (2020: 8.7%).

Business Group SAMEA (South America, Middle East and Africa) also significantly outperformed the market during the year. Although 10.4% more vehicles were produced in the region compared to the previous year, Business Group SAMEA’s revenue rose by an impressive 24.8% on an inflation- and currency-adjusted basis. This growth was largely supported by high-volume programs in Turkey and South Africa. As a result of the sharp depreciation in various currencies in the SAMEA region, revenue consolidated in Swiss francs only rose by 7.1% to CHF 94.7 million (2020: CHF 88.4 million). In line with the improved capacity utilization, Business Group SAMEA was able to increase its EBIT to CHF 15.7 million during the reporting year (2020: CHF 10.9 million); this corresponds to an increase in the EBIT margin of 4.2 percentage points to 16.6% (2020: 12.3%).

INNOVATION LEADERSHIP FOR A SAFE JOURNEY TOWARDS A CLIMATE-FRIENDLY FUTURE

Advancing electrification and sustainability are the dominant trends in the automobile industry for Autoneum. The Company has launched additional projects to further reduce the consumption of fossil fuels, energy, and water in its own production processes and boost the share of recycled and recyclable materials in its products.

In addition, the use of artificial intelligence and simulation software in the development of acoustic driving comfort is becoming more important for the electric vehicle of the future. This and other topics were the focus of the Automotive Acoustics Conference 2021. For the first time in its history, the renowned international conference for vehicle acoustics was conducted digitally under the scientific leadership of Autoneum. In virtual exhibition and networking spaces, leading industry and acoustics experts provided insights into the increasing requirements for alternative, environmentally-friendly drives and discussed the latest methods for acoustic optimizations in vehicles with participants.

Autoneum launched further product innovations on the market in 2021 such as the felt-based Flexi-Loft technology, which combines noise protection and sustainability in an optimal manner. Flexi-Loft stands out not only for its first-class acoustic performance and geometric flexibility, but also for its excellent environmental performance. For example, Flexi-Loft is comprised of at least 50% recycled cotton fibers, and thanks to a unique combination of fibers it has a grammage that is up to three times lighter than traditional felt. This reduces the weight of the components for the vehicle interior and thus the total vehicle significantly, which contributes to lower CO2 emissions and a higher driving range. In addition, Flexi-Loft enables a precise adjustment to complex shapes and thus improves the sound-absorbing characteristics of inner dashes and carpets. The sustainable technology is also extremely versatile and, together with existing acoustic concepts such as Hybrid-Acoustics and Prime-Light, offers a light, adaptable, and environmentally-friendly alternative to traditional felts and foams.

With ABC – “alternative backcoating” – Autoneum has brought another innovative process to market, in which a thermoplastic adhesive is used to coat carpets. The thermoplastic mono-material is not only easier to recycle than traditional latex backcoatings, applying the adhesive using the ABC process requires less energy than the production of latex-based materials and can be carried out entirely without water. This further improves the environmental performance of needlepunch carpets from Autoneum, which already contain a high share of recycled PET.

In several respects, 2021 was a special year. Autoneum celebrated its tenth anniversary as an independent, stock-listed company and looked back with pride on a wide range of successes during its first decade. Over the course of these ten years, the Company not only expanded its global network, it also standardized its business and production processes around the world and improved its products and services. The entire Company was gradually focused on more sustainable processes and products. Since its initial public offering in 2011, Autoneum has developed a unique identity and a firm position as an established brand in the industry. Celebrations to mark the anniversary were held at all locations around the world.

According to market forecasts1, global automotive production will increase by around 9% year-on-year in 2022. The semiconductor shortage is likely to continue for some time into 2023; however, we anticipate that the situation will increasingly stabilize over the course of the financial year 2022 with higher volatility in the first half of the year. Autoneum’s revenue development is expected to be in line with the market. Based on market development, Autoneum is targeting an EBIT margin of 4–5% and free cash flow in the high double-digit million range. In addition to addressing the current semiconductor shortage situation, Autoneum will continue to pursue its consistent implementation of strategic priorities and initiatives. The potential impacts of the current Ukraine crisis on our business cannot be estimated at this point in time.

In view of the given circumstances and difficulties, we view the annual result as a success, one that was achieved together with all of our employees around the world and of which we can be proud. We will continue to pursue the path we have embarked on and also invest in the expansion of our portfolio and the development of further innovations for sustainable technologies and products. We would like to thank our employees sincerely for their outstanding, tireless commitment, their perseverance, and their loyalty to the Company, especially in these challenging times. Our thanks also go to our many longstanding customers, suppliers, business partners and shareholders for their confidence in Autoneum.

back
Autoneum at a Glance
next
2021: Year in Review