2020 was marked by the coronavirus pandemic and its massive impact on the global economy. Worldwide lockdowns and production stoppages at vehicle manufacturers had drastic consequences for the entire automobile industry and Autoneum in the first half of the year. Although the market recovered in the second half-year, the number of vehicles produced for the year as a whole remained well below the level of the previous year. Thanks to prompt adjustment of the cost structure to the reduced market volume and improvements achieved during the turnaround in North America, Autoneum nevertheless managed to generate an operating profit in 2020 in an extremely difficult and volatile market environment.

Revenue development in line with market

At 74.6 million, the number of vehicles produced globally was down –16.1% in 2020 compared to the prior year, when around 89 million vehicles were produced. In line with the negative market dynamics, Autoneum’s revenue in local currencies decreased by –18.7% in 2020. The slightly higher decline in revenue compared to the market is due to the lower share of Asia in Autoneum’s total revenue. Impacted by the appreciation of the Swiss franc against the most important currencies for Autoneum, consolidated revenue dropped by –24.2% from CHF 2 297.4 million in 2019 to CHF 1 740.6 million in 2020. While the coronavirus pandemic – due to temporary production stoppages – led to a market slump in the first half of 2020, the recovery and pent-up demand in the second half were also clearly reflected in Autoneum’s revenue. 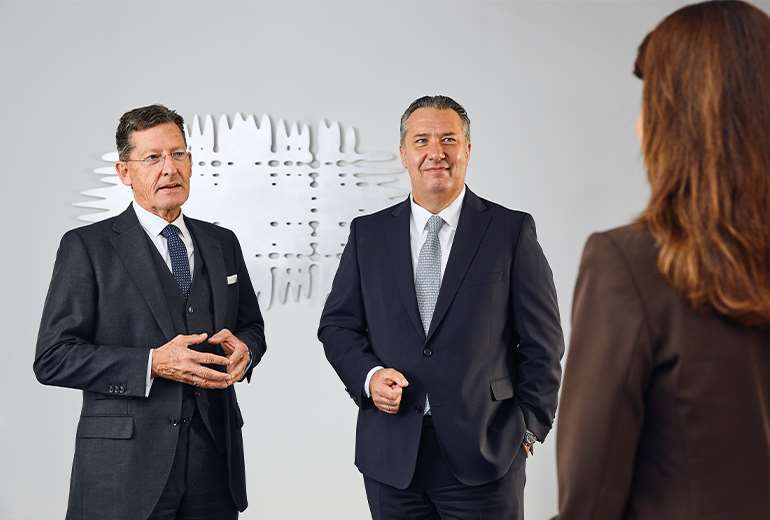 Hans-Peter Schwald (l)
Chairman of the Board

The sharp drop in production volumes worldwide and the resulting sudden underutilization of production capacities at Autoneum had a strong negative impact on the Company’s profitability. Autoneum responded with a comprehensive range of immediate measures: For example, operating expenses were limited to the absolute minimum necessary and personnel costs were promptly adjusted in all areas to the lower production volumes. In addition, investments were reduced to a minimum thanks to significant investment activities in past years. The adjustment of costs to the new market reality, which is forecast to continue in the coming years as well, enabled Autoneum to benefit considerably from the global recovery in the second half of the year.

The on-site support provided by Group specialists, which is essential for the turnaround in North America, was hampered by the massive travel restrictions imposed by the pandemic and could therefore not be provided to the desired extent. The team in North America nevertheless managed to achieve significant, sustainable improvements. Thanks to the global cost reduction program and positive contributions from the turnaround program in North America, Autoneum generated a positive operating result in 2020 despite the slump in the market. Compared to the previous year, EBIT increased by CHF 60.8 million to CHF 27.8 million, thereby, despite the decline in revenue, almost achieving the prior-year EBIT of CHF 35.0 million excluding one-time charges from impairments. The EBIT margin improved to 1.6% (2019: –1.4%). After deduction of the financial and tax result, the net result for 2020 as a whole amounted to CHF –10.7 million (2019: CHF –77.7 million including one-time charges from impairments in the amount of CHF –68.0 million).

Strict cost management and the controlling of investments in tangible assets to the necessary minimum resulted in a CHF 122.5 million improvement in free cash flow to CHF 112.5 million (2019: CHF –9.9 million). Reduced investments in tangible assets in the amount of CHF 41.9 million (2019: CHF 125.8 million) were the main driver behind the increase in free cash flow. Thanks to disciplined cost management, cash flow from operating activities improved substantially over the prior year to CHF 149.7 million (2019: CHF 119.2 million), despite a sharp fall in revenue. This positive cash flow development enabled a reduction in net debt (excluding lease liabilities) of CHF –63.3 million to CHF 271.7 million (December 31, 2019: CHF 335.0 million) in 2020 for the first time since 2016. As of December 31, 2020 the equity ratio fell to 22.9% (December 31, 2019: 27.1%). In addition to the negative net result, this decrease was particularly due to currency losses from translation of financial statements of foreign subsidiaries into the stronger Swiss franc recognized directly in equity.

Personnel changes on the Board of Directors

Given the negative net result and so as not to burden the financial recovery of the Company, the Board of Directors will propose to the Annual General Meeting on March 25, 2021 waiving the dividend for the 2020 financial year.

The Board of Directors will propose Liane Hirner and Oliver Streuli for election to the Board of Directors. Both have extensive expertise in the areas of finance and corporate management. Peter Spuhler will not stand for reelection at the Annual General Meeting in order to focus on managing Stadler Rail. He was an important driving force in the founding of the Company, played a major role in shaping Autoneum thanks to his entrepreneurial expertise and showed great commitment to the Company. The Board of Directors thanks him sincerely and wishes him continued success.

Innovation leadership in the service of customers and the environment

Two trends defined the automobile industry in 2020: ongoing electrification and sustainability. Autoneum anticipated them early on in research and development and so today offers a product portfolio that is not only geared to the individual needs of vehicle manufacturers, but also meets end consumers’ expectations when it comes to sustainable mobility. In order to make it easier for customers to select particularly environmentally-friendly components for future models, the Company launched a sustainability label for acoustic and thermal management in the reporting year, making it the first automotive supplier to do so. “Autoneum Pure.” stands for technologies with an excellent environmental performance in all four phases of the life cycle: material procurement, production, use and end of life. For example, components with a high content of recyclable materials or those that achieve significant weight savings compared to comparable standard components qualify for the label. Autoneum offers various multifunctional technologies that meet the high standards for “Autoneum Pure.” products: Ultra-Silent for underbody systems or battery undercovers, Di-Light for carpet systems, Prime-Light and IFP-R2 for inner dashes and floor insulators as well as Hybrid-Acoustics PET for e-motor encapsulations and engine-mounted parts.

Another contender for the “Sustainability Champion” award is already in the starting blocks: In 2020, Autoneum launched a frunk – short for front trunk – made of Ultra-Silent that was specifically developed for electric vehicles. With demand for electric cars growing sharply, the need for lightweight components that enable a greater driving range for this category of vehicles is rising as well. The innovative component made of Ultra-Silent is particularly light thanks to its textile fibers, which contributes to reduced vehicle weight, less energy consumption and longer driving pleasure. At the same time, the Ultra-Silent-based frunk also improves vehicle acoustics. Thanks to their sound-absorbing material composition, the Ultra-Silent components reduce annoying noises in electric vehicles such as the ones resulting from heat pumps and tires at the source. The Ultra-Silent-based frunk is highly sustainable as well: It is made entirely of PET and contains up to 70% recycled material.

Sustainability, however, is not limited to e-cars: With Relive-1, Autoneum offers an innovative tufted carpet for all powertrain models that meets the highest requirements of sustainable mobility. The technology for the compact to premium class, which has been awarded the “Autoneum Pure.” label for outstanding environmental friendliness, convinces with its particularly sustainable use of raw materials: For example, only recycled PET bottles are used to manufacture the carpet fibers. Autoneum reuses this raw material, thus conserving natural resources and reducing plastic waste. At the same time, Relive-1 stands for the above-average product quality of Autoneum: Compared to standard carpets in compact to large class vehicles, Relive-1 carpets are more durable and have excellent cleanability, which is a benefit for recreational vehicles like SUVs.

At –25.6%, the decline in revenue in local currencies at Business Group Europe reflected the regional, pandemic-marred market development. Revenue in Swiss francs decreased to CHF 641.8 million (2019: CHF 900.9 million). Thanks to a consistent reduction of costs and the use of state programs such as short-time work, the Business Group adjusted its cost base quickly to the lower level of revenue. However, the massive decline in revenue in the first half-year had a strong negative impact on EBIT, reducing it for the year as a whole to CHF 21.5 million (2019: CHF 51.0 million). Nevertheless, a positive EBIT margin of 3.3% (2019: 5.7%) was achieved.

In North America, too, the Business Group’s negative organic revenue growth of –19.3% reflected the adverse regional market dynamics. Impacted by the market development and negative currency effects, revenue in Swiss francs fell by CHF –248.3 million to CHF 753.5 million (2019: CHF 1 001.8 million). Significant operational and thus financial improvements were made in 2020 under the ongoing turnaround program. Additionally, a reduction in expenditure exceeding the one achieved in the turnaround program was realized and further costs were flexibilized where possible. As a result, the Business Group increased its EBIT remarkably by CHF 91.2 million to CHF –43.6 million (2019: CHF –134.8 million, including one-time charges from impairments in the amount of CHF –62.0 million). Before impairments, Business Group North America managed to improve the operating result by CHF 29.2 million despite the marked fall in revenue.

Asia was the first region worldwide where the coronavirus pandemic led to the closure of plants as early as in February. The main market, China, recovered to the prior year’s level during the first half of the year and even exceeded it in the second half. At –11.3%, Asian automobile production thus recorded the smallest decline in comparison to other regions in 2020. With an organic revenue decline of just –2.1%, Business Group Asia significantly outperformed the market. The recovery of the Chinese market, which is crucial for Business Group Asia, was decisive for the significantly stronger growth of the Business Group compared to the Asian market as a whole. Revenue in Swiss francs decreased to CHF 254.1 million (2019: CHF 275.7 million). Expenditure discipline and positive effects from headcount adjustments that were already initiated the year before resulted in large cost reductions that enabled Business Group Asia to increase its EBIT in 2020 to CHF 22.2 million (2019: CHF 11.9 million including one-time charges from impairments in the amount of CHF –6.0 million) despite the drop in production. The EBIT margin doubled to 8.7% (2019: 4.3%) compared to the prior year.

Business Group SAMEA (South America, Middle East and Africa) also significantly outperformed the market, which contracted sharply as a result of the coronavirus crisis. Although around 20% fewer vehicles were produced in the region compared to the prior year, Business Group SAMEA’s revenue shrank by just –7.5% on an inflation- and currency-adjusted basis. This was largely attributable to high-volume programs in Turkey and South Africa. Due to the strong depreciation of various currencies in this region, revenue consolidated in Swiss francs fell by –29.7% to CHF 88.4 million (2019: CHF 125.8 million). Through prompt adjustment of costs in response to reduced volumes, Business Group SAMEA generated a slightly improved EBIT in the reporting year of CHF 10.9 million (2019: CHF 10.7 million); this corresponds to a considerable EBIT margin of 12.3% (2019: 8.5%).

Global automobile production is expected to increase in 2021 compared to 2020, even though the number of vehicles produced is still not forecast to reach the level of 2019. Autoneum’s revenue development is expected to be in line with the market. In particular, business performance in the first half of 2021 will be strongly influenced by the further course of the pandemic and is likely to be volatile accordingly. Therefore, revenue may be slightly lower in the first half-year compared to the second half of 2020. Based on the forecast market development and further operational improvements in North America, the Company expects an EBIT margin of 4–5% and a free cash flow in the higher double-digit million range for 2021.

After an already challenging previous year, 2020 demanded a lot from all employees in their joint efforts to get Autoneum back on course. We would like to thank our employees sincerely for their outstanding, tireless commitment, for their acceptance of difficult cuts and for their loyalty to the Company, especially in challenging times. Our thanks also go to our customers, suppliers, business partners, most of whom have been with us for many years, and shareholders for their confidence in Autoneum.

back
Autoneum at a Glance
next
2020: Year in Review