2019 was an extremely challenging year for the automobile industry. The continuing weakness of the global economy, ongoing trade disputes and the increasing regulation of mobility im­pacted vehicle demand negatively. But 2019 was also a year of change for Autoneum internally. An in-depth analysis carried out by the new Group Management in the fall showed a need to reevaluate the Group’s performance over the short- to medium-term. In Business Group North America, the operational and commercial problems have proven more extensive than originally assumed. As a result, the turnaround program launched in spring 2019 was replaced at the beginning of 2020 with a dedicated and far more comprehensive program for the North American sites.

As a result of weak demand, the number of light vehicles produced worldwide fell again sharply in 2019 compared to the previous year; whereby the decline of almost –6% was much steeper than in 2018. Thanks to numerous production ramp-ups and a favorable model portfolio, Autoneum generated organic revenue growth1 of 2.5%, despite the global market cooling. Revenue consolidated in Swiss francs rose by 0.7% from CHF 2 281.5 million to CHF 2 297.4 million. 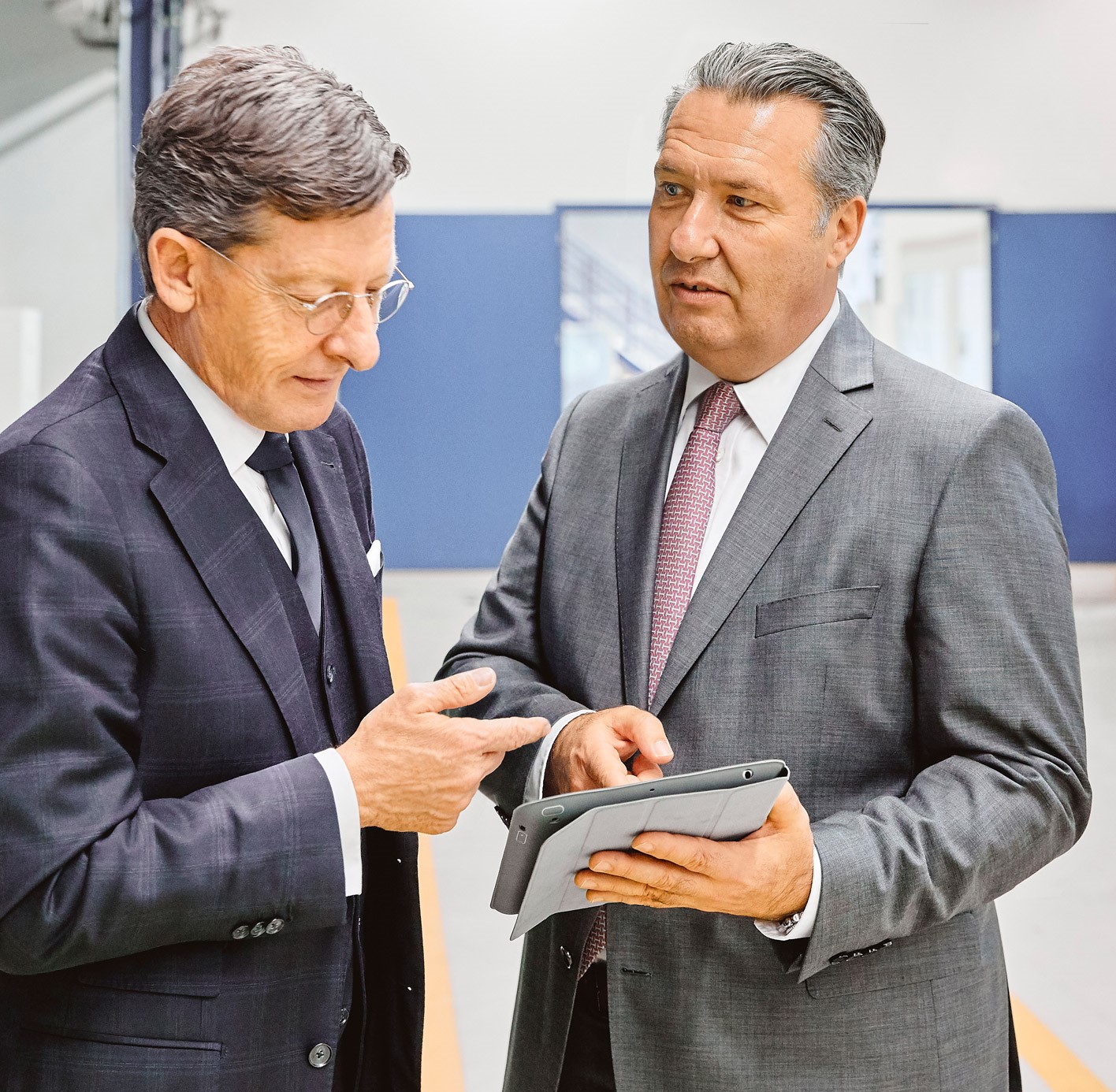 Operational inefficiencies in North America and impairments on fixed assets in this region were the main reason for the – first-ever – negative net result in 2019. In addition, the sharp drop in automobile production in Europe and China as well as associated lower utilization of production capacities in the affected Business Groups also burdened the Group’s profitability. EBITDA excluding IFRS 16 effects decreased to CHF 126.0 million (2018: CHF 197.2 million), which corresponds to an EBITDA margin of 5.5% (2018: 8.6%). One-time charges from im­pairments in the amount of CHF –68.0 million had a negative impact on EBIT, reducing it to CHF –32.9 million (2018: CHF 114.1 million). Without these one-time charges, EBIT amounted to CHF 35.0 million. The EBIT margin excluding impairments was at 1.5% in 2019, and taking those into account the margin decreased to –1.4% (2018: 5.0%).

Lower equity ratio as a result of higher net debt

Continuing high operating losses throughout the year and impairments on fixed assets led to a net loss of CHF –77.7 million in 2019 (2018: net profit of CHF 74.7 million). The operating losses of Business Group North America and investments in fixed assets resulted in a negative free cash flow of CHF –9.9 million (2018: CHF –40.7 million). However, despite the lower result, free cash flow in 2019 was improved compared to the prior year. IFRS 16 also required a change to the recognition of leased property, plant and equipment and associated liabilities each in the amount of CHF 301.6 million. This reduced the equity ratio to 27.1% as of December 31, 2019. On a comparable basis, excluding IFRS 16 effects, the equity ratio was at 32.7%. Net debt excluding the IFRS 16 effects rose to CHF 355.2 million (December 31, 2018: CHF 283.7 million). With the two bonds issued in 2016 and 2017, the long-term credit agreement with a bank syndicate and two shareholder loans, Autoneum continues to be solidly financed.

Committed to the mobility of the future

In 2019, Autoneum again launched various innovative components that help automobile manufacturers to produce quieter, lighter and more environmentally friendly vehicles. The multifunctional, lightweight components are suitable for vehicles with all types of drives. This is a great advantage for car manufacturers in both pre-development as well as series production of models and makes Autoneum a sought-after supplier of acoustic and thermal management solutions. With battery undercovers made of Ultra-Silent, the Company has adapted this textile underbody technology for use in electric vehicles for the first time. These battery undercovers act as insulators helping to reduce sound that enters the passenger cabin, as well as pass-by noise. Noise-reducing components are also essential in electric models. External and internal noise sources such as electric drive elements, fans and pumps are more audible in this vehicle category due to the lack of engine noise and therefore impact driving comfort. Thanks to their light weight, battery undercovers made of Ultra-Silent also help to ensure a greater driving range. In view of increasing pass-by noise regulation around the world, Autoneum now offers customers the multifunctional Alpha-Liner wheelhouse outer liner, which is highly effective in reducing tire noise and allows noise absorption to be customized for the specific requirements of the vehicle model. Made primarily of recycled PET fibers and fully recyclable, Alpha-Liner wheelhouse outer liners are particularly environmentally friendly.

Autoneum is setting standards for automobile noise and heat protection not only with its innovative components and technologies, but also digitally, as the first automotive supplier in the world with a configurator for the acoustic management of vehicles. The online portal “Acoustic Garage” (acoustics.autoneum.com) is based on Autoneum’s unique simulation expertise and offers a comprehensive information and product experience on all aspects of noise protection in cars. Users – whether customers or end consumers – can configure a product package to their individual needs on the basis of selected criteria such as lightweight construction, sustainability and aesthetics. In this way, Autoneum helps vehicle manufacturers, ensuring optimal acoustics in future models.

In October 2019, the Board of Directors appointed two new members to the Group Executive Board: Matthias Holzammer and Bernhard Wiehl. Matthias Holzammer has taken over as CEO from Martin Hirzel, under whose tenure Autoneum became the internationally recognized market and technology leader in thermal and acoustic management that it is today. Matthias Holzammer demonstrated his operational expertise in various positions, among others as the long-standing Head of Business Group Europe, which he successfully restructured from 2012 on, transforming it into a highly profitable Business Group until his departure at the beginning of 2019. Also contributing to its transformation was Bernhard Wiehl, who succeeded Dr Martin Zwyssig as CFO of the Company at the end of October 2019. Bernhard Wiehl was responsible for Finance & Controlling at Business Group Europe from 2013 to 2019.

At the beginning of 2019, Dr Alexandra Bendler succeeded Matthias Holzammer as Head of Business Group Europe. Since joining the Company in 2008, she has held various management positions, including Head of Group Strategy & Marketing and Head of Sales & Program Manage­ment for Business Group Europe. In North America, Greg Sibley assumed responsibility for the corresponding Business Group after a transition period on July 1, 2019 from Fausto Bigi, who had served as the interim Head since the beginning of 2019. With his extensive expertise in the areas of production, development and sales at leading automotive suppliers, Greg Sibley is ideally suited to tackling the current challenges in North America.

Board of Directors proposes waiver of dividend payment

In view of the significant net loss, the Board of Directors will propose to the Annual General Meeting on March 25, 2020 no dividend to be distributed for the 2019 financial year.

The drop in automobile production compared to the previous year led to a revenue decline of
–5.6% in local currencies at Business Group Europe in 2019. Revenue in Swiss francs decreased by –8.5% to CHF 900.9 million (2018: CHF 984.5 million). The earnings were impacted not only by the volume-related loss of profitability, but also by the continued challenging labor market situation and a shortage of skilled employees especially in Eastern Europe. Driven by a weaker capacity utilization and despite a cost-savings program to reduce fixed costs that was imple­mented early on, EBIT in the reporting period dropped to CHF 51.0 million (2018: CHF 82.0 million), corresponding to an EBIT margin of 5.7% (2018: 8.3%).

In an equally declining market, Business Group North America increased its 2019 revenue by 7.2% on a currency-adjusted basis, mainly due to various production ramp-ups by German and Japanese vehicle manufacturers. In Swiss francs, revenue climbed to CHF 1 001.8 million (2018: CHF 921.8 million). In the 2019 financial year, Business Group North America recorded an EBIT of CHF
–134.8 million (2018: CHF –8.2 million), which includes one-time charges from impairments of fixed assets of CHF –62.0 million. As the insufficient profitability in North America is not only limited to two loss-making US plants, a comprehensive turnaround program has been imple­mented at the North American sites at the beginning of 2020 that replaces the predecessor program that had been launched in spring 2019. It focuses on the solution of operational and commercial problems as well as the improvement of the cost structure.

In Asia, too, the corresponding Business Group succeeded in boosting revenue in a declining market. Driven by new and high-volume programs of European and Asian automobile manu­facturers, Business Group Asia grew in local currencies by 8.1%. Revenue in Swiss francs rose to CHF 275.7 million (2018: CHF 260.3 million). Profitability has been significantly burdened by the expansion of capacity undertaken in recent years in line with the originally forecast growth of the Chinese market. This and the resulting one-time charges from impairments of fixed assets totaling CHF –6.0 million led to an EBIT of CHF 11.9 million (2018: CHF 18.9 million). Excluding impairments, the EBIT margin was at 6.5% (2018: 7.3%).

Business Group SAMEA (South America, Middle East and Africa) continued its growth path in the reporting year. Despite the market slump in this region, revenue in local currencies climbed by 32.7%, a result boosted by inflation. High-volume export programs in Turkey and South Africa as well as much higher production volumes compared to the previous year in the key SAMEA market of Brazil were key factors. Due to the strong depreciation of various relevant currencies, revenue consolidated in Swiss francs was up less remarkably by 12.8% to CHF 125.8 million (2018: CHF 111.5 million). Thanks to favorable capacity utilization, the Business Group generated an EBIT of CHF 10.7 million (2018: CHF 10.8 million). The EBIT margin was at 8.5% (2018: 9.7%).

Autoneum expects revenue growth at market level in 2020. Based on the uncompromising focus on the turnaround and the implementation of corresponding measures in North America, the Company aims at significant increases in profit­ability and a slightly positive net result. Furthermore, a free cash flow in the mid double-digit million range is anticipated, which will have a positive effect on the net debt. Based on further operational and financial improvements in 2021 (“Year of Transition”), Autoneum expects a return to a sound profitability level in 2022.

A special thank you goes to more than 13 000 Autoneum employees for whom the past year was not an easy one. Despite the associated challenges, our employees give their best every day to put the Company back on the path to success, together with the Board of Directors and the Group Executive Board. We would like to extend our gratitude to our customers, shareholders and all those who have accompanied Autoneum along the way for their loyalty and allegiance, especially in this phase of the Company’s development.

back
Autoneum at a Glance
next
2019: Year in Review